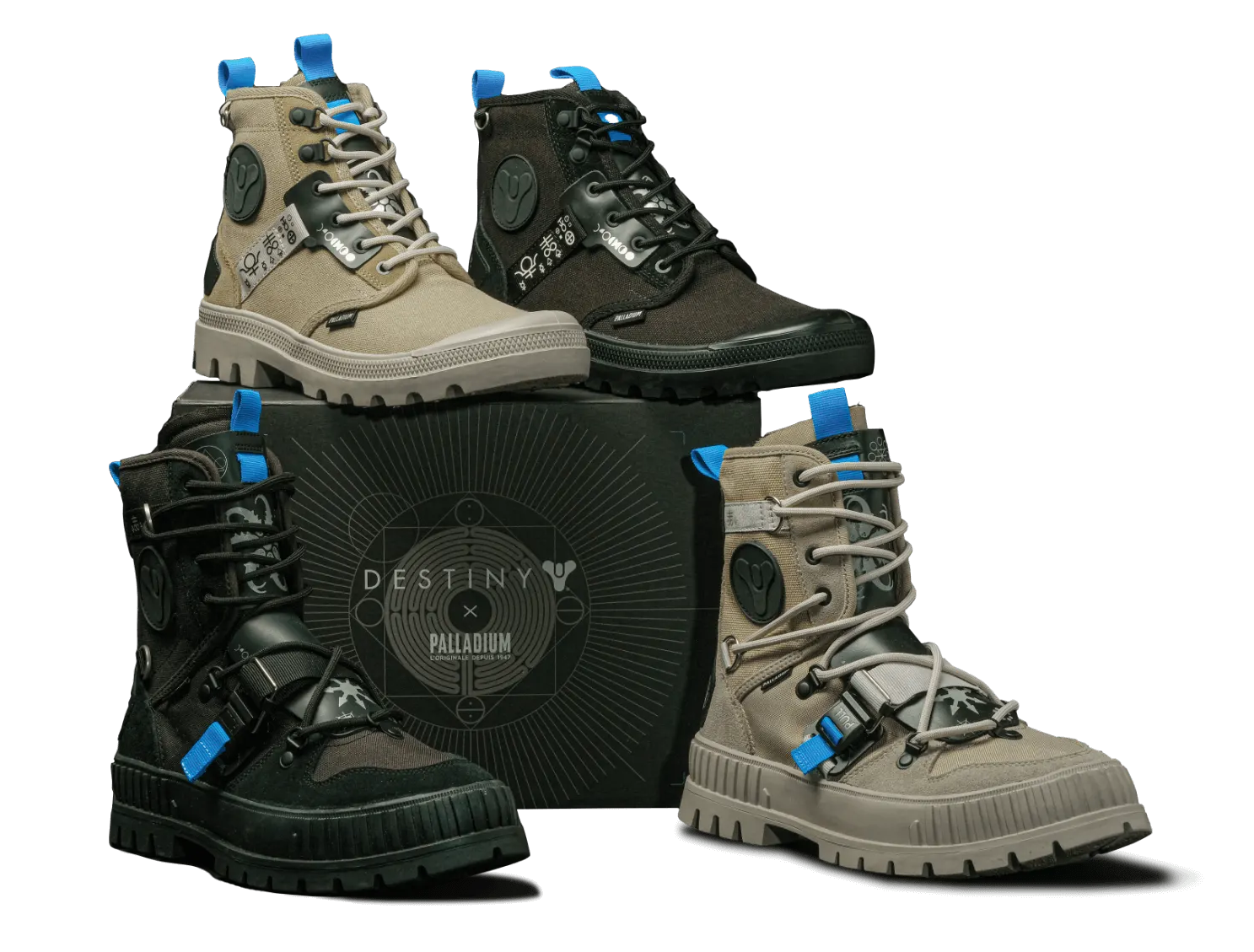 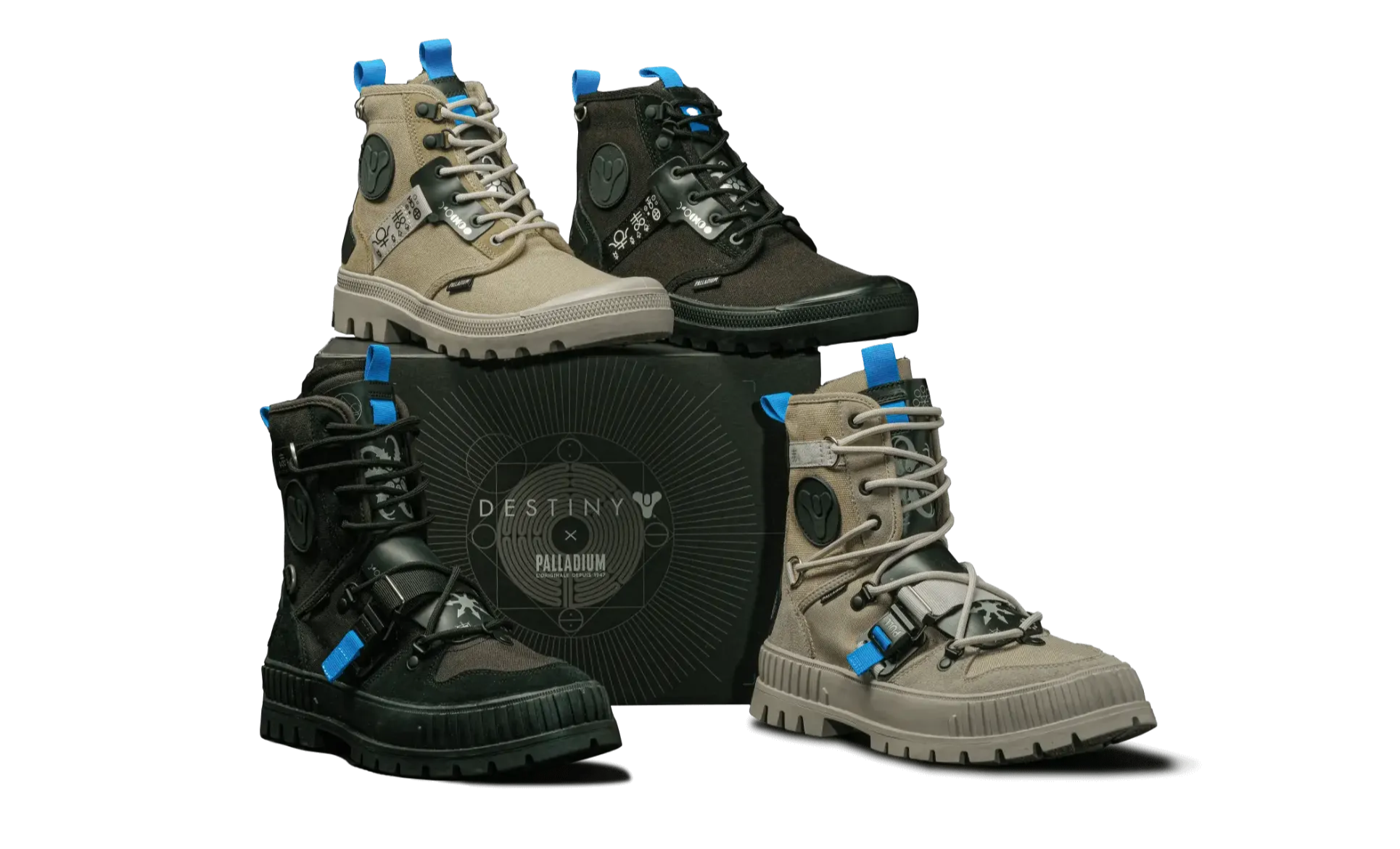 Celebrating Bungie’s Destiny series, we bring you new intergalactic versions of our Pampa and Pallashock boots

Celebrating Bungie’s Destiny series, we bring you new intergalactic versions of our Pampa and Pallashock boots 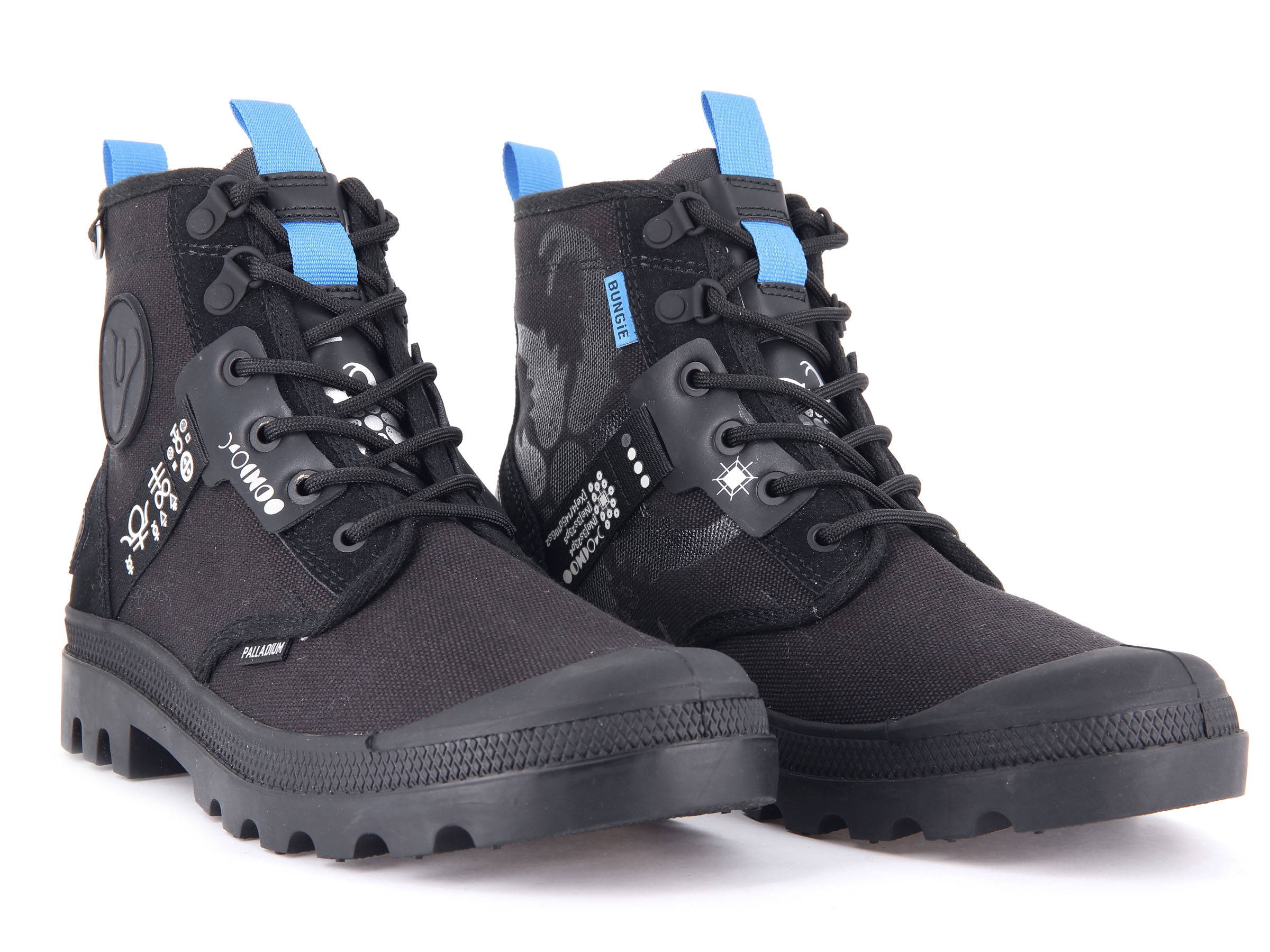 Bungie and PALLADIUM introduce a brand-new iteration of PALLADIUM’s iconic Pampa boot. The Pampa x Destiny is a casual, sneaker-inspired high-top boot that recalls graphic elements from the Destiny universe. 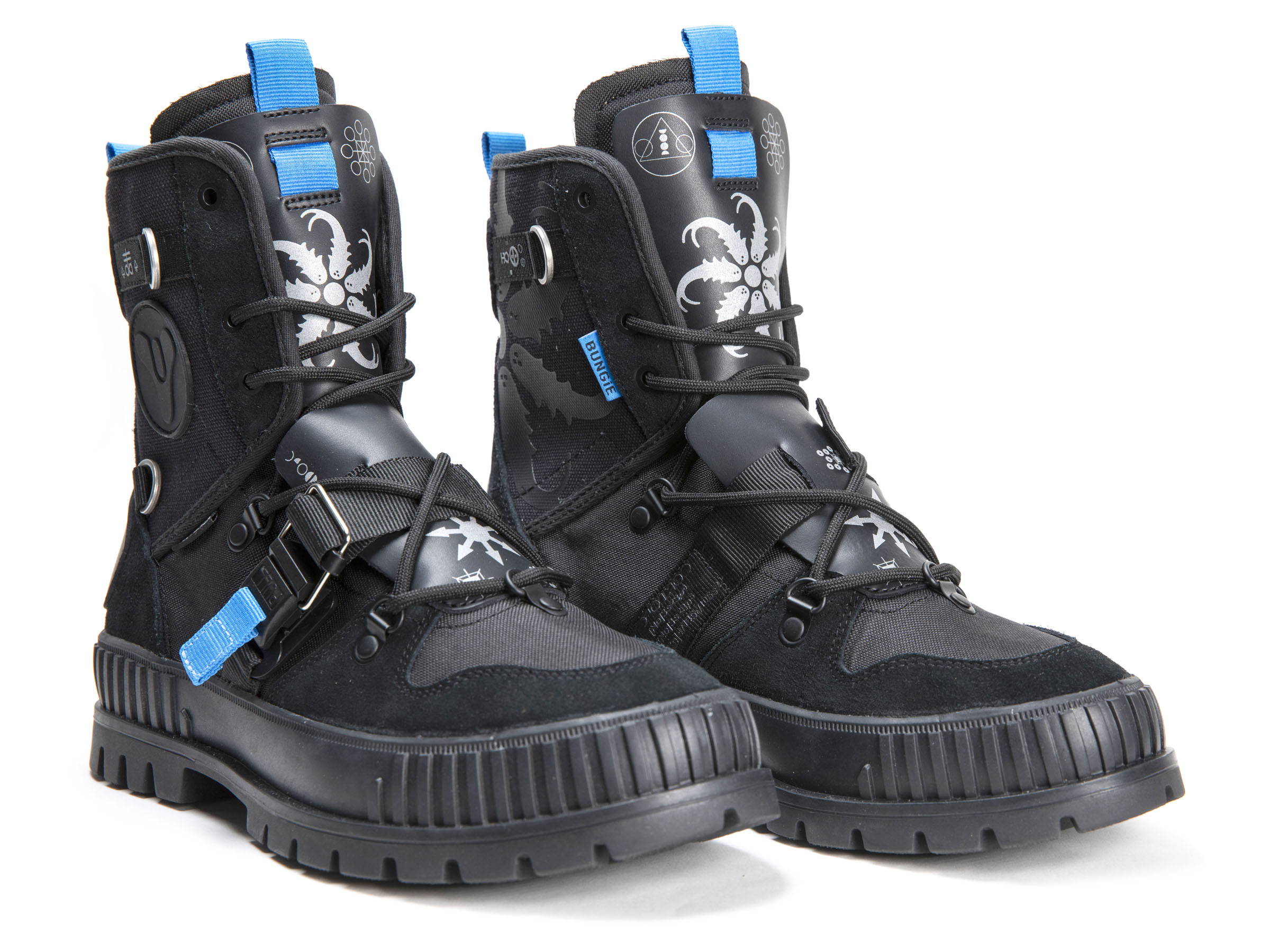 The Pallashock x Destiny is the true hero of the collab—Designed with a heavy cotton canvas upper, mixed nylon and leather, and blue webbing details—bringing defining elements of the Destiny series to life.

Destiny 2 is one of the world’s most popular first-person shooter video games and action MMOs. Developed and published by Bungie—the iconic studio behind the Halo franchise and classic titles Myth, Oni, and Marathon—Destiny2 tasks players with defending humanity and exploring the mysteries of the solar system. Players embody guardians who wield powerful elemental abilities. They can select from multiple classes, upgrade and swap elemental subclasses, as well as outfit themselves with a variety of customizable weapons and gear to suit their aesthetic and playstyle.

Since its launch in 2017, Destiny 2has received yearly expansions that progress the story forward, add a wealth of additional content, and further refine the gameplay experience for its passionate community of players. Quarterly Seasons introduce additional objectives and challenges for players to best, including dungeons and raids that offer powerful rewards.

Destiny 2’s most recent expansion Lightfall was released in February 2023. 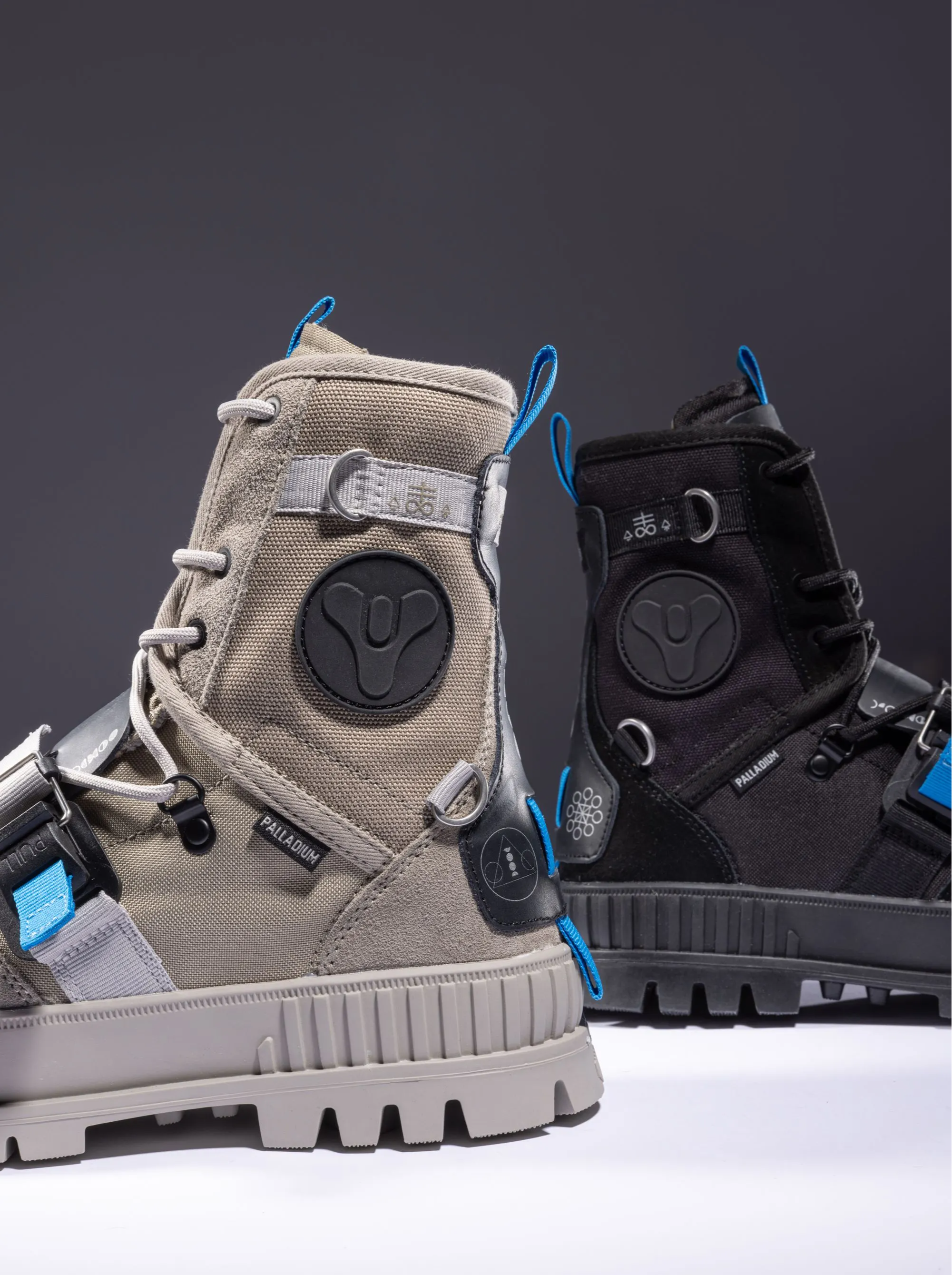 Over 75 years of crafting style-savvy utility-inspired footwear has taught French heritage brand Palladium a thing or two about building gear that lasts, and helped the brand earn its stripes in creating a uniform of the people.

From its roots developing footwear for the French Foreign Legion in the 1940s, through its evolution supplying trek- ready options for the Great Outdoors, the road upon which Palladium has travelled has connected the brand with a dizzying diversity of people, places, and cultures. In doing so, the decades traversed have instilled Palladium with an inherent respect for freedom, progress, and discovery.

Palladium’s eco-conscious credentials inch ever closer to its 2025 goal of becoming 100% sustainable. In supporting its ethical targets, each season the brand donates thousands of boots to global charities. And, if the journey has equipped us with anything, it is a belief that life has so much to offer if you #daretodiscover.

Bungie is a videogame studio based in Bellevue, Washington, dedicated to creating hopeful worlds that inspire passionate player communities and lifelong friendships. For more than three decades, Bungie has worked towards that vision, creating some of the world’s most celebrated video game franchises, including Marathon, Myth, Halo, and Destiny. Bungie is focused on developing the future of the Destiny universe and new worlds to come. 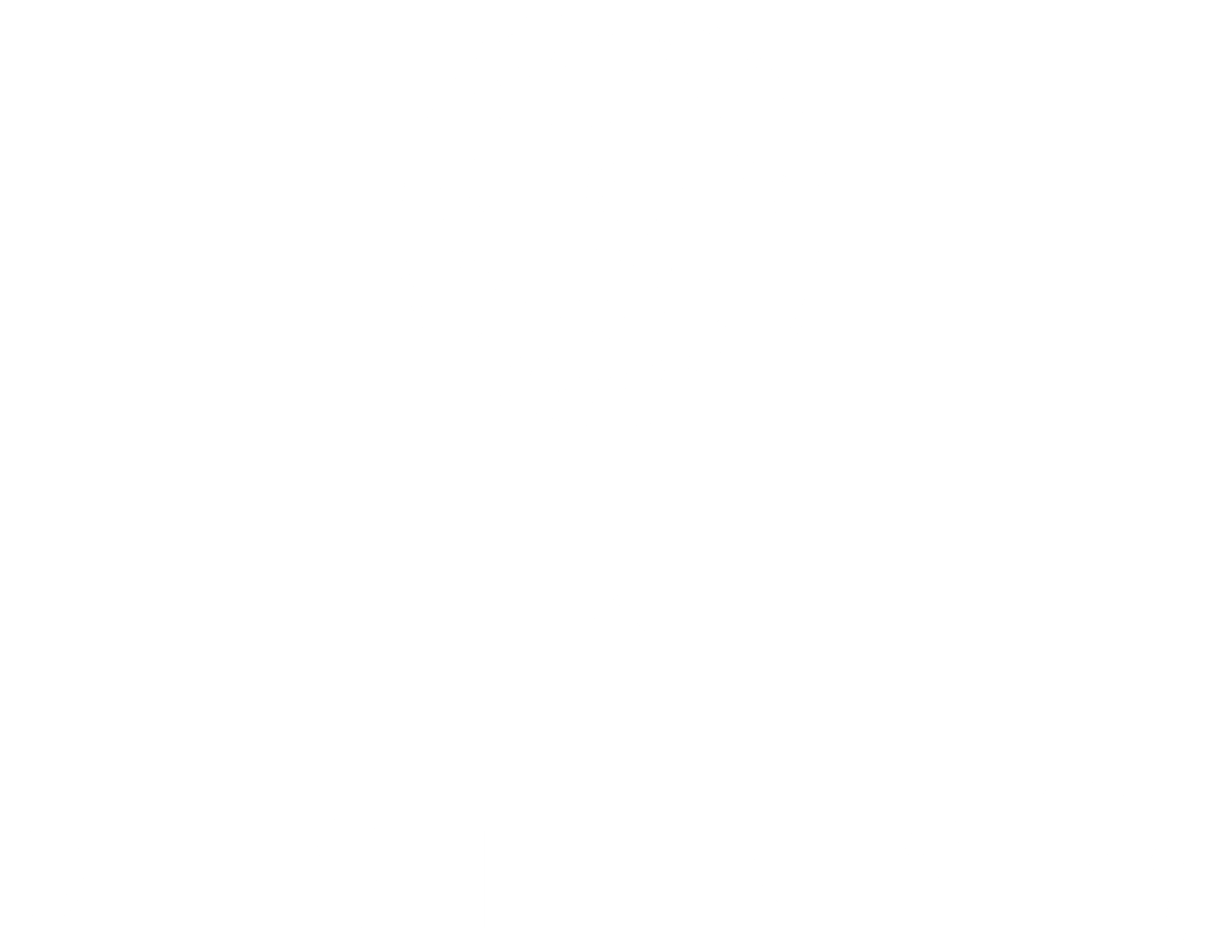 Product has been added to your wishlist.
You can view your wishlist by creating or login account.
Please create account through "" email.
Login Register